To comply with the executive order mandated by the Governor of Guam, Fish Eye Marine Park will temporarily close operations and all activities effective Thursday, March 19, 2020 until further notice. 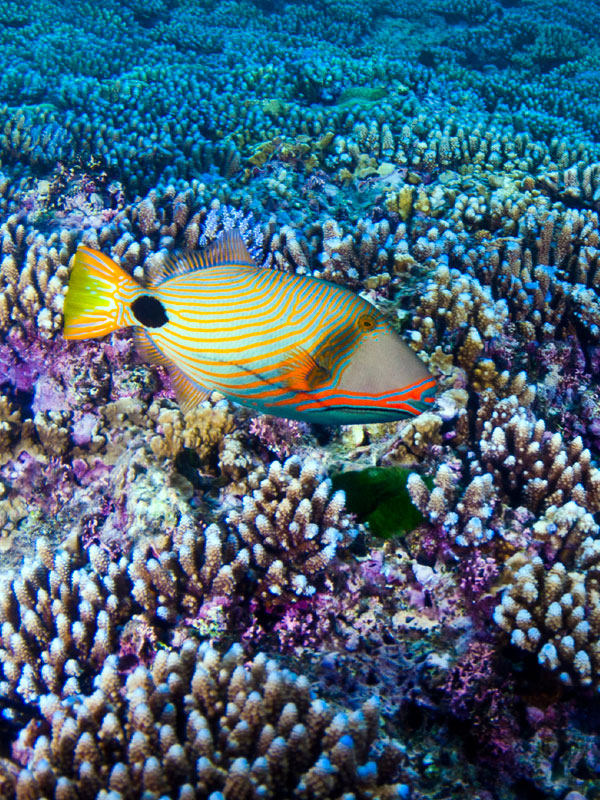 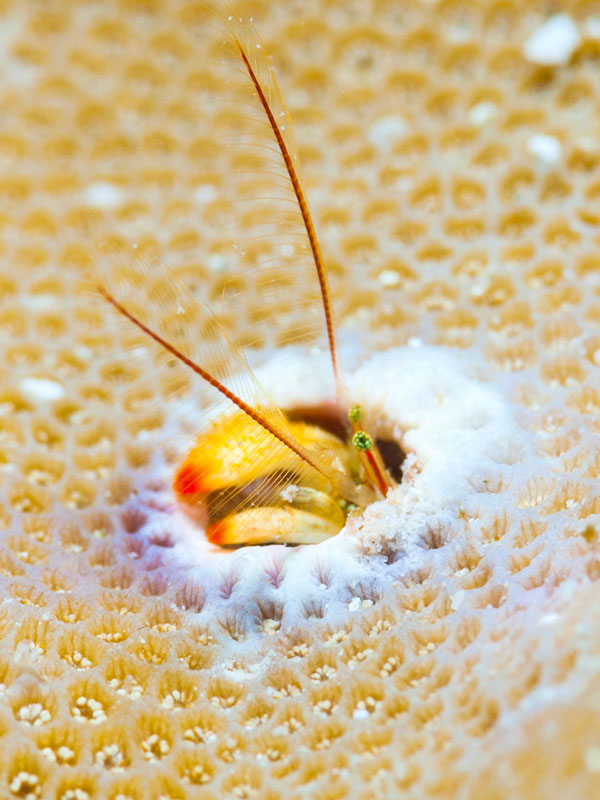 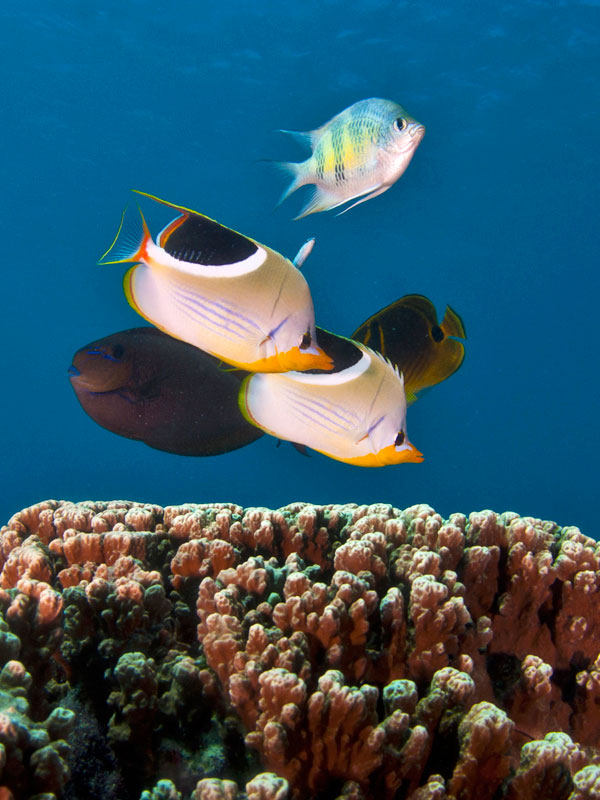 The color of Piti Bay brilliantly varies with many shades of blue from turquoise to emerald green.
The renowned Camel Rock, Bomb Holes, Piti Channel and the underwater observatory
are among the unique sites situated in the Piti Bay providing a diverse environment ideal
for a variety of marine life to make their home.
There are more than 200 species of fish that breed and preen in the Piti Bay Marine Preserve. 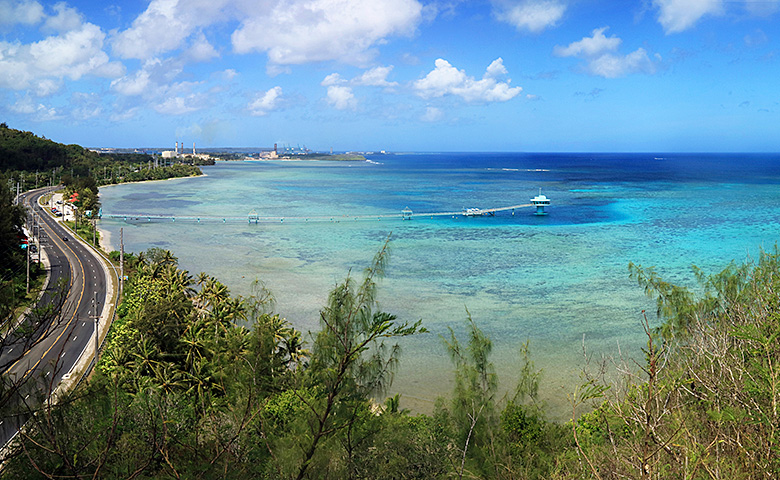 A view of Pity Bay from the hill in the Asan beach park.

One of five marine preserves designated and protected in Guam, the Piti Bay Marine Preserve has seven distinct areas, each with their special characteristics. 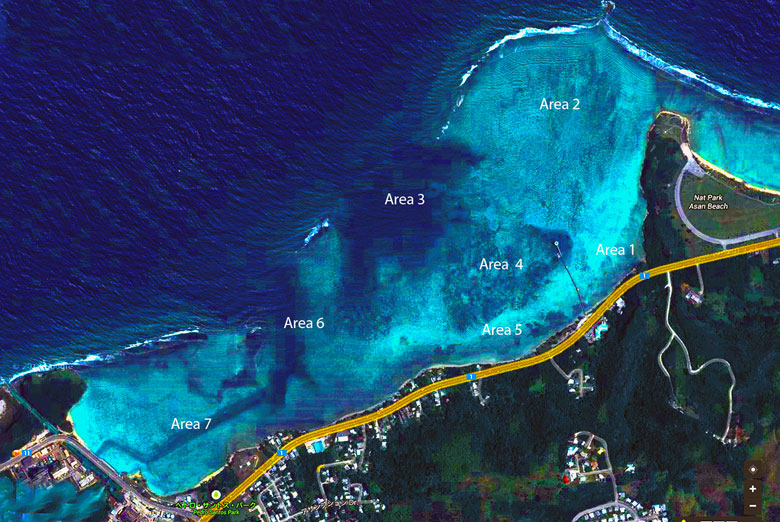 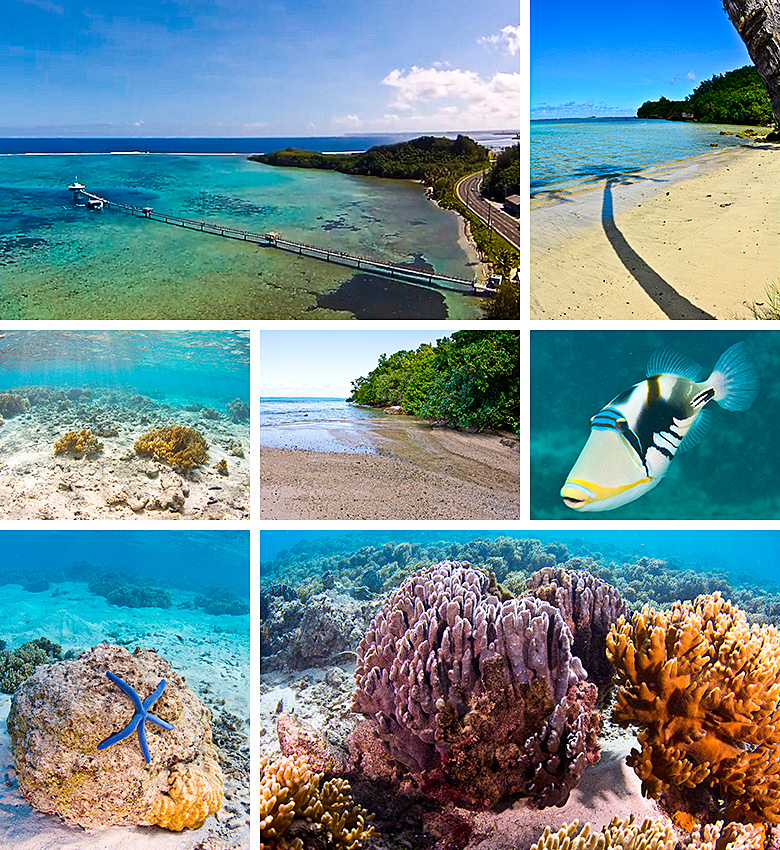 Fed by the Matgue River, this area is mostly reef flat covered by fine sand and silt and some low growth hard coral with scattered soft corals. This is a good area to find blue starfish and small clams. Interestingly, certain biological studies have shown a very healthy population of sea cucumbers, far more than on the other side of the walkway. 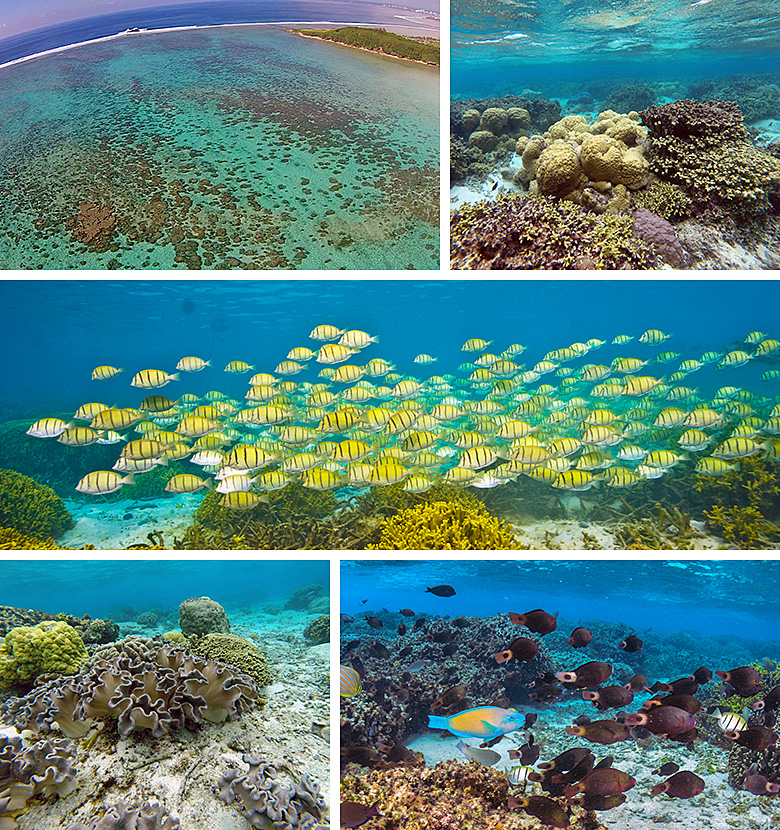 Low growing corals are scattered in the open expanses of the beautiful white sand. Closer to the reef, heartier corals show intense competition in a well-covered area extending from the northern channel past Camel Rock in the inner reef. Strong currents come in through the reef here and flush the area, keeping the water generally clear and aiding coral reef health, especially when the surf is high. This area is a large incubation and nursery area for many juvenile fish. It is also a feeding area for large groups of herbivores who roam the area. Eagle rays, whitetip and blacktip sharks are often found here. 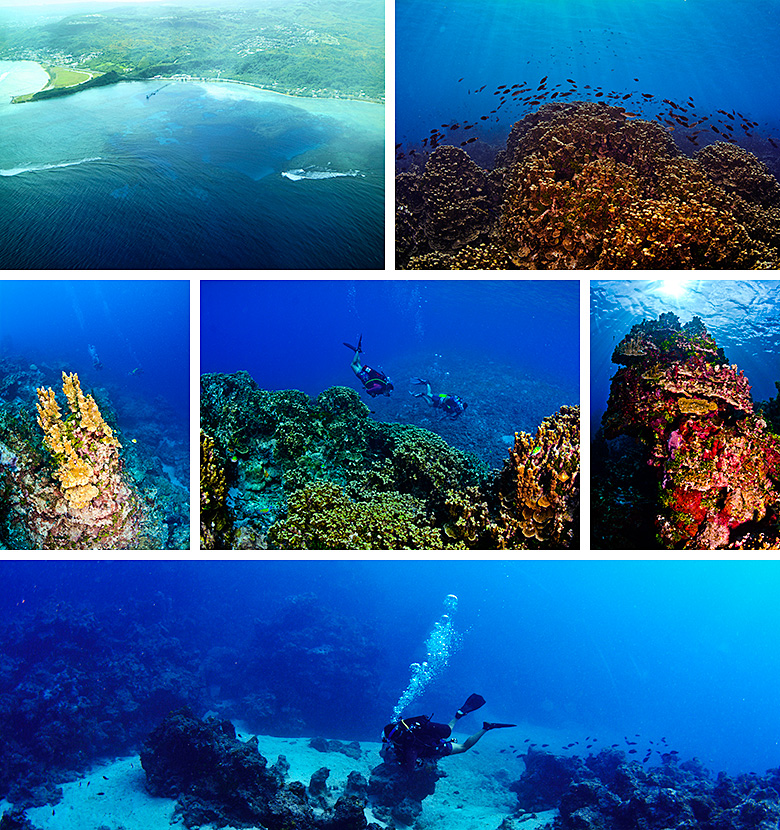 This area has beautiful old-growth corals, deep sandy patches and deep sand floor, cleaning stations, mating areas and a steady current that flow and feeds the many marine life in the bay. Eagle rays, sand rays, nurse sharks, sea turtles and other larger fish are seen on the sea floor here or in the deeper waters of the channel mouth. Along with Area 4, this area may be the most diverse and scenic area of the bay. The area is the main conduit to the open sea and the deep, sandy channel drops off fast. Currents here can be quite strong due to the large volume of water the channel handles during periods of high surf as it is one of the few major natural exits of the bay. This is the area known as the Piti Bomb Holes, which sometimes are mistakenly believed to be created by the bombs of WWII however in reality, the upper reef crust here and inland are pitted with a honeycomb and this “hole” is probably a collapsed cave that has filled with sand and sea water. More than 200 fish species have been counted within the holes’ area along with 100 types of hard and soft corals. A large part of the area has fields of snow white sand which is home to stonefish and gobies.
Ocean currents feed the corals at the west end of the hole. Many anemones flourish in the protection of the hard corals. Some small clams are also found here embedded in the hard corals. A large school of goatfish and a shoal of snappers live in the area.
Numerous butterflyfish, angelfish and parrotfish also call the reef home. A pack of Bluefin trevally marauds through the area. Fish life here is prolific due to protections of the preserve and numerous cleaning stations that attract fish. 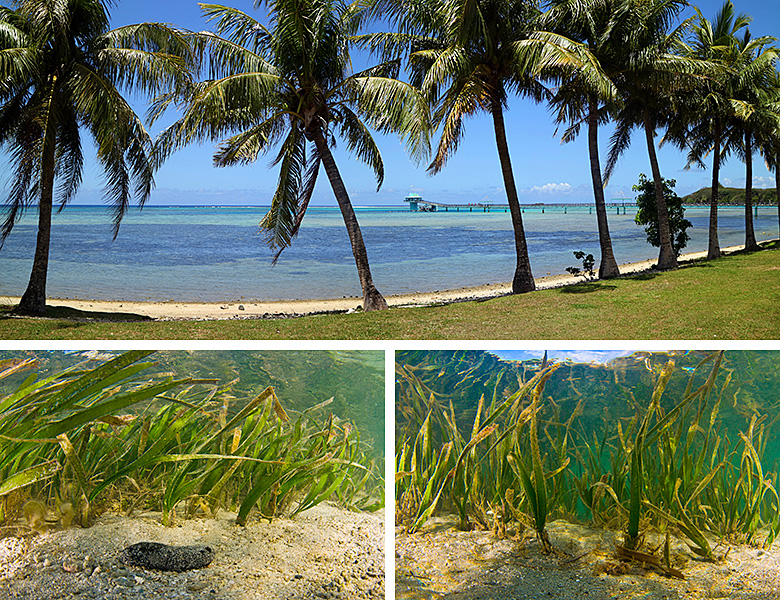 The seagrasses act as filters and incubation areas for marine life. This whole area was impacted by construction in the Nimitz Hill area in the 1970s. Red mud covered much of the inner reef and the grasses and the branching corals were smothered. However the seagrass beds have managed to revive over the decades and are now thriving. Some diver impact takes place near the park and entry by the Fish Eye observatory bridge. At the far end of the grass beds a WWII landing craft sits embedded in the reef, a remnant of the invasion battle that took place here.

Area 6 – Second Channel in the west of the bay This is an interesting part of the bay since the upper reef especially around the channel near the outer reef has strong coral growth with some unusual soft coral species that hosts fish like the silver Mooney that are normally found in brackish areas.
The portion that extends from outside the reef is a natural channel and was dredged out from the nearby power plant’s intake channel to connect with the natural channel. Dolphins like to come into the channel mouth to take rest as the sandy bottom makes it easy for them to spot any predators while they rest. Eagle rays also school in the channel when the current is outbound and strong. Within the deep parts of the channel, cone shells and other mollusks can be found on the sea floor. er channel is mostly shallow reef flats with a depth of 12 to 15 feet decreasing to 8 to 10 feet at the underpass. The channel itself is home to many sand dwellers including various shrimps, sea shells, juvenile fish like young crocodile fish, filefish and different lionfish and crabs. At night one can see sleeping parrotfish, large parading and mating sea hares, Spanish dancers, barber pole shrimp and numerous decorator crabs. This area is great for marine enthusiasts who appreciate the smaller marine life that dwell in the sand and other unusual habitats. The far end of the underpass has some large stands of sea grasses as well. The ocean current flowing through the underpass can be quite strong when the tide is coming in and the surf is high. This may explain why the majority of the last remaining staghorn corals in the bay occur in the favorable conditions found in the manmade portion of the channel. Lots of fishes in Piti Bay!

The color of the bay is stunning during daytime!

Recommend to watch the twilight, 30 minutes after sunset to

enjoy the ever changing color of the sky.

Please do not litter or throw trash into the ocean!!

Let’s protect the water and leave the bay clean and beautiful!

There are many benefits, when you book your tours directly in this website.